10 Tips for Game Masters from Oklahoma City’s Finest - OKgamers.com - Since 2006

Being a game master (GM) for a tabletop role playing game can be exciting. You’re part director, part storyteller, part thespian, part moderator and all powerful. Today more and more people are playing not only Dungeons & Dragons but also Shadowrun, Call of Cthulu, Vampire: The Masquerade, Star Wars, Pathfinder, Deadlands and many more.

If you’ve played any of these games, you may be considering becoming a GM but don’t know where to start. Or perhaps you’ve tried your hand at running a game but struggled with flexibility and managing your story. Seasoned GMs from one of Oklahoma City’s most popular game spots, Game HQ, gathered Saturday, March 11 at the store to share their tips and tricks for running a great game. 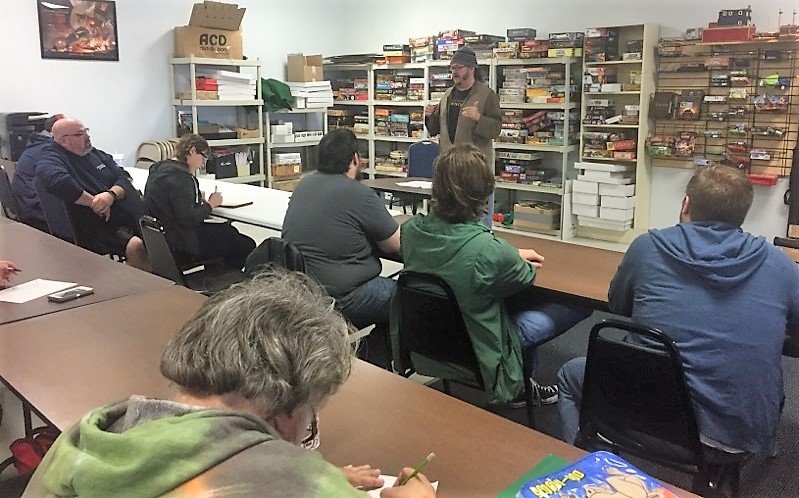 These are the top 10 tips from that class:

1. Start off on the right foot.

“Before you start play, take a moment to create focus,” GM Ashley King said. “You need to bring your players away from their real life problems and into the world of the game.” King suggests taking a moment to introduce yourself as the GM, introduce the adventure by reading the title and summary and establish any rules about breaks, phones, etc. From there, she then asks for everyone’s character backgrounds, inventory, names and confirming the correct pronunciation. “For some people (name pronunciation) matters a lot and will help with their immersion,” she said.

“If you know who all the NPCs are, then familiarize yourself with them and make a note for every NPC. The note should state, ‘what do the players need to know from this person for the story to work?’” suggests GM Mike Lee. “That way if you know already what they need to learn then you can riff instead of read and you can provide the information fluidly in the conversation instead of reading the information out of the book.”

Lee also suggests noting one thing that will make each NPC memorable. For example, if the module describes a nervous bookkeeper, be nervous or if the people are starving, keep bringing the conversation back to food. “Use your voice, your hands and your face,” Lee said and “make a fool of yourself early.” It makes it safe for your players to use an accent, be silly and improvise.

“Don’t write everything out to the smallest detail because often times your characters are going to go some place you never thought they would go,” GM Joe Vucic said. It’s about being flexible so you as the GM don’t feel that your adventure is ruined because players decide to spend the majority of their time in the tavern instead of diving into your carefully-planned dungeon. He suggests having a backup plan like an NPC who will direct the characters where you need them to go or allowing your world to be more of a sandbox. Vucic suggests knowing the big picture of your story instead of tiny details so that you can always direct players back to where they need to go.

4. Don’t be afraid to make it more challenging.

Sometimes your players are stronger than the RPG you’re running and faceroll the mobs you throw at them. GM Nick Graves suggests not being afraid to make adjustments, like adding more enemies or making enemies flank ranged characters. “They don’t always have to kill what they’re fighting,” Graves said. “Make a recurring enemy.” This makes for a more interesting and challenging story.

“Fear makes you feel alive!” GM Marcus Wiles said. While some RPGs like Call of Cthulu and Dread have fear as a mechanic, Wiles suggests using fear in any game for memorable role playing opportunities.Be descriptive and theatrical, he said. Try to scare your players not their characters.

One way to introduce fear and make characters question their mortality is by killing a high-level NPC. “Make them question what’s going to happen. True horror is when they know everything has gone wrong and there’s only one way to get out of it,” Wiles said. Using music, pausing for effect, an hourglass, a whisper in a single player’s ear and even the trusty sudden loud noise for a jump scare is effective. Lastly, he suggests ending your session on a cliffhanger to keep your players on their toes.

If you’re running the same module multiple times for different players, feel free to switch it up a bit, GM Chase Godfrey suggests. He said once you know your campaign, don’t be afraid to move encounters around, replace mobs with others or throw in something completely new. It also helps when players talk to each other so they don’t know what to expect even if you’ve run the same adventure for their friend in the past.

7. Get the starter set or quickstart rules.

When considering a new game, many RPGs offer starter sets or free quickstart rules. GM Matt Hoskins suggests going to the publisher’s website or drivethrurpg.com to download these free versions of their game. He said they’re geared toward new players and GMs with many of the things you need to play. Free RPG Day is also happening this year on June 17.

GM Peter Fischaber suggested taking advantage of the limited information your players have, specifically rolling your dice behind a screen in order to lie about the rolls. But, he said, to be careful about not using it against your players or to make it too easy for them either. “Where I like to (fudge the dice) most is if my players do something really stupid. I can use this device to make it easier for them on the fly.” He said it’s easy to fudge attack rolls when they’re struggling but he prefers to find opportunities to allow the players to do more damage like on saving throws in D&D or changing the enemy’s stats on the fly; the easiest being hit points.

9. Use theater of the mind.

Gridded combat using maps on the table can be really useful, but GM and Game HQ D&D Store Coordinator Robert Alaniz, suggests trying theater of the mind for combat encounters. He recalled one of his first times GMing a game for his niece and nephew and the moment his nephew grasped the scene he was describing by exclaiming, “I can see it, I can see it!”

“It’s a shared mental experience that happens and there’s no way that can be duplicated on the grid,” Alaniz said. Theater of the mind also tends to make combat faster and doesn’t pull players out of the story by pausing to unroll or draw maps.

To achieve this, Alaniz suggests being as descriptive of the scene as possible and not worrying about distances; instead having players describe their intent and having an idea in your mind of how they can or can’t achieve it. For example, knowing how many would be hit by common area or distance attacks.

10. Make it fun for your players and for you.

“If you’re not having fun running the game, how are your players going to have fun?” asks GM Mike Kirk. He said you have to learn your group and the quirks of your players to bring your story to life. “You’ve got to look at yourself as a director of a TV show or film and you’re picturing it as you’re telling it and watching your actors respond to how you’re giving direction. That’s the key to making the game believable and fun.”

Last but not least, King ended the day’s class by saying, “Give yourself permission to fail.” Every GM starts somewhere and no one is perfect. Go out, make stories and have fun.