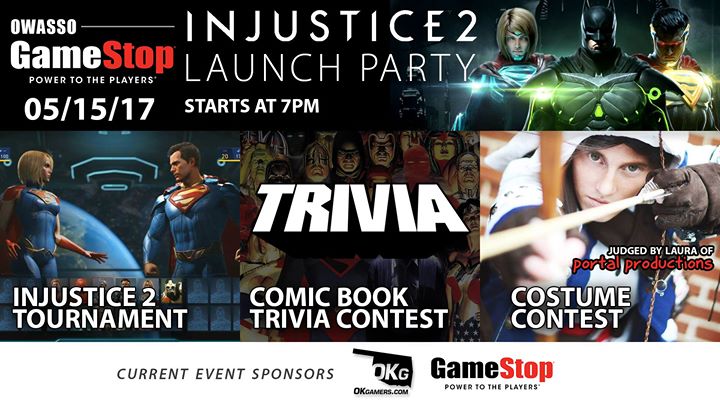 Join GameStop and OKgamers.com as we celebrate the Injustice 2 launch!

We’ll have an Injustice 2 tournament, Costume Contest and finish up the Trivia Contest, all free to enter!

COMIC COSPLAY CONTEST:
Show up in your best comic related costume to win! We’ll have Tulsa’s very own Laura of Portal Productions Cosplay judging this contest!

Costume Rules:
Costumes will be judged based on how close it is to the character’s likeness. Feel free to bring character reference photos. Bonus points if you make it yourself or demonstrate creativity!

COMIC TRIVIA CONTEST:
Think you know it all? Join us at 8pm for the Comic Trivia Contest! Battle it out with your trivia knowledge against other fans to determine who’s the trivia master!

That’s not all, but that’s all we can say for now!
We’ll see you after 7pm, Monday!