Magic the Gathering at Standard Showdown - OKgamers.com - Since 2006 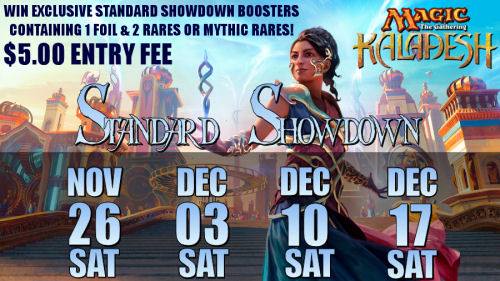 + 10 Standard Showndown packs to be given out
The First 5 people to bring a new person this week will have a better chance of receiveing the Standard Showdown packs.

One premium card from a currently legal Standard set, including Zendikar Expeditions and Kaladesh Inventions

Battle in the Standard Showdown for the chance to win a special, three-card booster pack that could include a Masterpiece Series Kaladesh Invention or Zendikar Expedition.

Zendikar Expeditions and Kaladesh Inventions appear in roughly 1 in 33 boosters.

*Cards from Oath of the Gatewatch appear only in the premium slot. Double-faced cards do not appear in these boosters.

Minanum of 8 People required to play