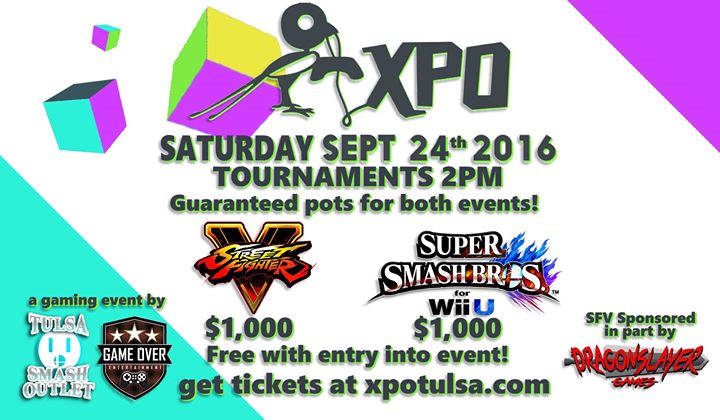 Featuring $1,000 guaranteed pots for both Street Fighter V and Super Smash 4. Tournaments are free to enter with purchased entry to the convention. More details at http://www.XPOTulsa.com

Double Elimination.
Every round will be Best 2/3 (3/5 for Semi, winners, loosers and grand finals.

No other specials for Mii Fighters will be allowed. Players are not allowed to transfer any existing Miis to a setup.

Stage Striking: Players eliminate stages from the Starter/Neutral stagelist until there is one stage remaining 1/1. The player or team without port priority strikes first.

The winning party bans 2 stages, the losing party chooses from the remaining stages.

Stage Clause: A player/team may not pick any stage they previously won on during the set. (Daves Stupid Rule Modified)

Stage Bans: During the stage ban phase, the winning player may ban two stages from the stagelist. All stage bans affect both players, meaning players who banned a stage may NOT counterpick that stage themselves later in the set.

Self-Destruct Moves: If a match ends with the successful use of a character’s self-destruct move, the results screen will determine the winner.

Team Colors: Players’ character colors must match their team’s color when possible, to avoid confusion (ex: Luigi on the green team must use the green costume).

DLC Characters: All DLC characters are legal in addition to the entire cast of characters on the select screen.
Wireless Controllers: any accept for the use of GamePad, gamepad use is prohibited.

Glitches: Any glitches that freeze the game are banned, and the player who initiated the glitch is subject to forfeiture of the match.

Additional Rules
Gentleman’s Clause: players may agree to a stage not on the stage list. (this is between the players, and issues are not to be brought to tournament organizer, that is your own choice)
Double Blind Character Select: Either player may request a double blind character select for the first game. In this situation, a third party is told, in secret, each player’s character choice. Both players then select their character, and the third party validates that the character selected is the same as what they said. pen and paper can be used if 3rd party can not be agreed uppon.
Port Priority: If an agreement cannot be made as to who gets what port, the players may enact a best-of-1 game of Rock Paper Scissors. Winner gets their port selection, loser selects any other port.

Neutral Start: Either player may enact this rule. Once enacted, both players may only use one of the two neutral starting ports. A best-of-1 game of Rock Paper Scissors may be used to determine who chooses port first. If both the Port Priority and Neutral Start rules are invoked, the player who is granted Port Priority selects one of the neutral start ports. Neutral starting ports are only applicable to Super Smash Bros. Melee. For Super Smash Bros. for Wii U, players may elect to move to opposite sides of the stage and then count down prior to starting the match.

Pausing: In the event that pause is not turned off, pausing the game is only legal while a player remains upon their OWN respawn platform, and only for the purpose of summoning a tournament organizer, or in the event of a controller malfunction. All other pauses will incur a stock loss to the offending player. If a pause causes an opponent to lose a stock, the offending player may be required to forfeit two stocks.

Stalling: The act of stalling, or intentionally making the game unplayable, is banned and at the discretion of the TO. Stalling tactics include but are not limited to becoming invisible, infinites, chain grabs, or uninterruptible moves past 300%; or abusing a position in which your opponent can never reach you. Any action that can prevent the game from continuing (i.e., pausing, freeze glitches, disappearing characters, game reset, etc.) will result in forfeiture of that match for the offending player. You are responsible for knowing your own character, and must be wary about accidentally triggering these effects.

Timeouts / Ties: The winner of a match that goes to time (time out) will be determined by stocks and then percentage. When the timer hits 0:00, the player with the higher stock count is the winner. If both players are tied in stocks, the player with the lower percentage is the winner. In the event of a percentage tie, or a match in which both players lost their last stock simultaneously, a 1 stock tiebreaker will be played with a 3:00 time limit. The result of the game’s built-in Sudden Death does not count towards the set count.

Stock Sharing is allowed in doubles. Trading controllers is not allowed.
Colorblind Clause: Players may request that their opponent change colors to accommodate colorblindedness, or if their color is indistinguishable from either the other team color or the stage background. This request must be made before the first game of the set.
Warm-ups: Warm-up periods, button checks, and “hand warmers” may not exceed 30 seconds on the game clock. Violation of this rule may result in an automatic forfeit at the discretion of the TO.

Misinterpretation: Games or sets are not to be replayed due to a misinterpretation of the rules; it is the players’ responsibilities to ask the TO for any clarification of the rule set in the event of a disagreement, and the outcome of a game or set will not be changed after the fact unless under extreme circumstances.
Coaching: Any coaching that happens during a set (anytime between the beginning of game one and end of the set) is banned. Players who violate this rule will be subject to disqualification from the event or eviction from the venue.

Collusion: Any collusion or results manipulation with your competitors is forbidden. If the TO determines that any competitor is colluding to manipulate results or intentionally underperform, the colluding players may be immediately disqualified. This determination is to be made at the sole discretion of the TO. Anyone disqualified in this manner forfeits all rights to any titles or prize money they might have otherwise earned.

Malfunctions: Any malfunctions associated with your controller are your responsibility. Players are responsible for using the correct settings BEFORE the set begins. Both parties need to agree if a match is to be paused or restarted because of a controller problem
———————————————————-
—– DISCLAIMER —–
– Bring Your Own Controller: Players are expected to bring their own controller and be prepared for every tournament set.