League of Legends at Tokyo in Tulsa: Celebrating five years of competitive gameplay - OKgamers.com - Since 2006

The League of Legends tournament will take place throughout the three-day convention.

Believe it or not, League of Legends wasn’t always the number one game in the world, and it definitely didn’t always share a spot at the competitive table at Tokyo in Tulsa.

Cody Willmon hosted online tournaments for the young game out of his home, cultivating up to 64 teams from across the country to compete for RP. Staff at HXC Gaming Events took notice of the huge turnout, eventually inviting Willmon to partner with them to help grow the competitive scene. After some successful online events, Willmon wanted something more “real” for the fast-growing game.

“I originally didn’t realize the potential, but once we saw the success, I wanted to bring the League tournaments to a LAN format,” Willmon said. “I joined an Oklahoma Facebook group for League that had maybe 200 people in it and hosted a lot of online stuff. Eventually, I split from that group with Landon Carroll to create the current Oklahoma League of Legends Facebook group. The biggest struggle was getting a League tournament set up at Tokyo in Tulsa due to the limitations of the venue. Finally, a vote passed to have League at Tokyo in Tulsa in 2013, and after experiencing some expected bumps and twists, the event was a success.” 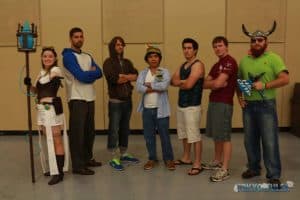 Texas team Farmers Fighting won the first ever League of Legends tournament at Tokyo in Tulsa 2013.

And a success it was. Twelve teams showed up to compete in the uncapped tournament with Texas team “Farmers Fighting,” lead by Khoa Bui, clawing their way to victory and claiming the very first championship title. This success cemented League’s place at Tokyo in Tulsa, and the event only grew from there.

“Right before Tokyo in Tulsa that year, it was announced the Tulsa Convention Center was being renamed, and Cox was enhancing their internet; this was awesome timing for the gaming community,” said Saif Khan of OKgamers.com. “SMG’s technicians were excited and used several OKgamers events following the upgrade to test out the limits of this new internet. TnT and OKg may have had concerns for internet in 2013, but come 2014, we were ready for whatever the League community had to throw at us.” 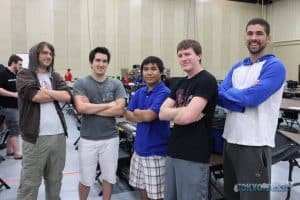 In 2014, Texas team Farmers Fighting took first place for the second year in a row.

In 2014, Landon “Deadi” Carroll took over managing the League tournament and became the League of Legends Tournament Organizer for OKgamers at Tokyo in Tulsa. The competition took place over the three-day convention and hosted 13 teams from Oklahoma, Kansas, Arkansas and Texas at the Cox Convention Center in Tulsa. The event was also livestreamed on Twitch and shoutcasted by volunteers, which would continue for years to come. One seed and favorites to win “Farmers Fighting” took first place, only losing a single game to second place Team Maroon.

“The first tournament was a challenge,” Carroll said. “My team and I had never run a tournament, let alone a convention tournament with a shoutcasted livestream. In the end, we had a great turnout, minimal problems and learned a tremendous amount in order to continue improving and growing over the coming years.”

The 2015 tournament saw some major overhaul and the first cap split of the tournament. Teams had the option of choosing either the Gold-capped division or the Uncapped division based on their rank and competition level, resulting in a four-team Uncapped bracket and an eight-team Gold-capped bracket. Each division hosted a round robin on the first day of the convention to help seed the teams before each division began the two-day competition.

Carroll’s United as ONE competitive League team “Team ONE Mid” took first place in the Gold-capped division and Thinh “IEATLEGOS” Dinh’s “Mystik Gaming” took first in the Uncapped division after suffering a disappointing first round loss in 2014. After competing in 2013 and 2014, Mystik Gaming defeated the defending champions “Farmers Fighting,” which made the victory all the sweeter.

“Competition was always growing so naturally talent would increase as well from the year prior,” Dinh said. “More eyes on the scene meant bigger turnout, which grew every year. It was a refreshing feeling knowing that you put in all the hours of practice to achieve your goal of winning.

“TnT was always a rough time since we would never have a solid roster during TnT since one of our main players was competitive in fighting games as well. I knew that I wanted to keep the “crown” in state, so after being knocked out first round with a last minute, weaker roster in 2014, it gave me the motivation to not let that happen again. Our hard work paid off as we won in 2015.”

With the largest turnout within its short history, nine Platinum-capped teams and five Uncapped teams participated in last year’s 2016 League of Legends Tournament. General skill growth and community quarrels about the difference in skill level between Platinum and Diamond convinced Carroll and the organizers to bump the Gold-cap division to Platinum-capped. 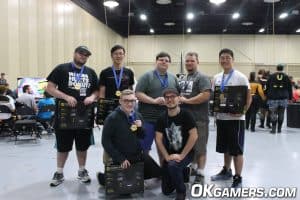 “It was definitely a tough battle of an event,” Counts said. “Starting from the night before the round robin, three of us crammed in to one bed and the other two slept in chairs. Needless to say, we were not at peak performance for the round robin the next morning. We lost a lot of games we shouldn’t have lost. I went out and bought an air mattress and a blanket so we would have more room to sleep, and that ended up helping us a lot. We came back the next day more energized and ready to go.

“The finals were a best of five, and the opposing team had some of the top Platinum players in Oklahoma. We were down 1-2 in the series, so we have to win two in a row to clutch the series. We won important team fights, the games went in our favor and we came out on top! The venue itself was also great; checking out the cosplays and market was a lot of fun. This tournament specifically grew my thirst for competition and inspired me to create the OKLCS.” 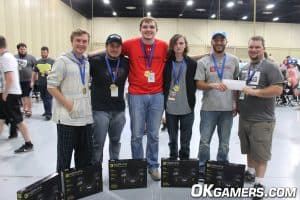 Now, the fifth year of Tokyo in Tulsa’s League of Legends Tournament is right around the corner and will take place July 14-16 at the Cox Convention Center in Tulsa. This year is also the 10th anniversary of the Tokyo in Tulsa convention, and OKgamers has expanded its staff to support even more PC gaming with Carroll moving up to assistant director of PC Gaming and Brian Babcock of Bad Wolf Ops taking over Gaming Networking.

“I think everyone is super excited to see how the LoL tournament at TnT plays out this year,” Khan said. “With the last year’s efforts from Jack and the OKLCS, the recruiting and work Landon and United as ONE has put in, and the new networking hardware from TnT, I think we all are looking forwards to the best turnout the LoL community has ever seen in Oklahoma!”

For more information about the event, visit http://www.tokyointulsa.com/gaming/.

OKgamers would like to thank our sponsors tinyBuild, Papa Johns, United as [ONE] Gaming, Bad Wolf Ops and PJ Gamers for their help in supporting OKgamers!