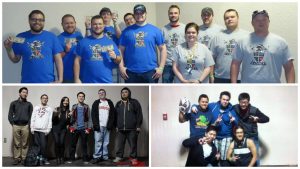 Only a week before the event, planning was thrown in to chaos by the hosting venue backing out. With Landon fielding two teams from his personal community, United as [ONE] Gaming, he couldn’t let his community’s first live event fall flat. He contacted the organizer, Saif Khan, who, by a stroke of organizational genius, managed to arrange a new venue by raising funds through a Kickstarter-style fundraiser. With additional help from a sponsorship from Tokyo in Tulsa, the event went off without any major bumps in the road.

“The event was an absolute blast and great success,” Landon said. “It was at this event that my personal community met Saif Khan, Cody Willmon, Thinh Dinh and Mystik Gaming, J Lin and Duke Vang and Insync, and Clay Langley. Cody and I realized that there was a massive player base in the state, playing the most popular game in the world, that was being completely unnurtured. With my long history of being in leadership of online communities, I decided it was time to give the community the organization and management it deserved – it was then that Cody and I created League of Legends Oklahoma.” 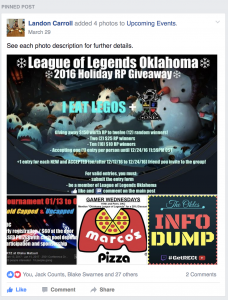 The new community, “League of Legends Oklahoma,” created May 4, 2013, started off simple: players would share their individual conquests and woes or look for teammates. As more venues began taking an interest in hosting League tournaments, the group posts evolved to detailed posts about team formation and discussions about local tournaments and events. This led Landon and the admins of OKLOL to create and maintain a master roster to help players more easily connect. Somewhere along the way between posts about Twitch streams and YouTube videos, active and detailed threads about patch notes, champion matchups and item builds emerged. The community had evolved: players started forming groups of friends, personalized memes emerged, and what started as a simple group solidified into a true community built strong by personal bonds.

“I believe the vision we have implemented for OKLOL is both unique and healthy,” Landon said. “We are not a focus group or a Facebook forum – we are a community. League of Legends brought us together, but it’s merely the foundation for a much greater community, an intertwined network of relationships. We talk about League a lot, but we also talk about current events, local news, art, music, community events, and meme each other. Where many would create a regional group about League of Legends, we strive to create a gathering place for Oklahoma gamers that happen to also play League of Legends. We want to be a place for OKLOL players to call home.”

The latest installment of the OKLOL group was the development of the OKLCS, a two-division online tournament scene that pitted Oklahoma teams against each other. The formation of the OKLCS by community members Jack Counts and Alex Tu filled a void in the OKLOL community by providing an online tournament scene for members who do not have the luxury of traveling to competitions or are barred for financial reasons. The OKLCS has given members a way to become more ingrained in the community and also provides a new category of content for discussion in the group. (read more about the OKLCS)

Fast forward to the end of 2016, the future for the OKLOL community looks bright: membership continues to grow, with the community nearing 2,000 members, and activity is at an all-time high.

“I believe the success of the group will be directly related to the popularity of League, and our growth in membership has been on a steady upward curve for awhile now and will likely continue at this rate,” Landon said. “We will continue to support live tournaments so long as there are venues and coordinators willing to have us. I hope the OKLOL community continues to bring in new members and strengthen the bonds between existing members.”

Special Thanks from Landon Carroll:

Special thanks to my amazing wife Amanda for allowing me the time and effort to continuously support the local gaming community.

To Alex Tu and Jack Counts for coordinating OKLCS at an outstanding level of excellence.

To my friends and family at United As [ONE] Gaming who have been more than happy to share our vision with the OKLOL community.

To my admin team who have come alongside me from the very beginning, who have believed in my vision, and who work fervently daily to make this group successful and pleasant:  Jack Counts, Matthew Parker, Thinh Dinh, Clay Langley, Ariel West, Chad Crockett (honorary), Cody Willmon (honorary).

To the venues and organizers who have hosted us over the years: PJ Gamers, DZ Comics and Gaming, Sunny’s Gaming Lounge, RTZ Esports Arena, Tokyo in Tulsa, SWOSU.

To Saif and the staff of OKGamers.com for supporting and nurturing us.

And lastly, to the members of League of Legends Oklahoma.  Every like, every reply, every post, every whiney salt-filled rant, every horrible screenshot of a mediocre normal game – these seemingly meaningless, mundane actions are what drives us forward and make us unique.  It is truly a pleasure and an honor to serve you all.