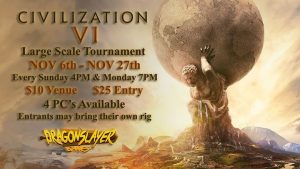 Dragonslayer Games is having it’s own EPIC tournament for Civilization VI! This will be a multiweek event for the entire month of November!

Entry is $25 (Into prize pool) Venue is $10 (This pricing is for the entire event, so you’ll only pay once, and we ask that you pre-register if you intend to make it out and you don’t have a PC of your own, we only have 4 available, so that PC will be assigned to you for the duration of the event)

We have 4 PC’s ready to play – FIRST COME FIRST SERVE! We are allowing up to 8 players in the event, however additional entries will need to bring their own rig up to the shop.

We’ll throw an additional $100 in the prize if all 8 slots are taken!

Participants will be required to show up each Sunday at 4PM (To close) and each Monday at 7PM (To close) until November 27th, OR until a victory condition is met!

Rules are as stated below:

Barbarians and Tribal Villages ON

You may be absent from two days before disqualification.