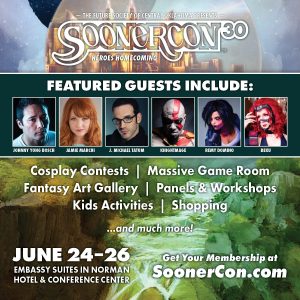 Join us for a weekend with special guests:

Don’t miss this weekend of fun for the whole family!

Save when you buy memberships online at soonercon.com. Children 12 and under are free with paid adult membership. 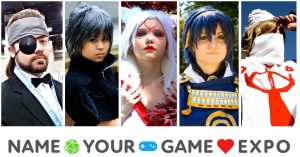 Love for video and tabletop gaming comes in many forms, and cosplay is one such way! That is why we are proud to host a competition to showcase talents. We will have divisions for Craftsmanship and Showmanship so cosplayers of all backgrounds will be able to compete and show off their work! Bonus points for gaming-related cosplays.

—-Rules and Dress Code—-
The cosplay contest is open to all attendees of NYGExpo, excluding the convention’s staff and volunteers. For entrants 13 years of age or younger, we ask that you bring a parent or guardian with you to sign a consent form for you to enter.
We will cap contest entries to the first 50 contestants to register. Please make sure to sign up as soon as you can to guarantee a spot!
*We will have separate divisions for Craftsmanship (cosplays you have made yourself) and Showmanship (if you have not made your cosplay).
*As NYGExpo is a gaming-focused convention, bonus points will be awarded to contestants whose cosplays are related to video/board/card games!
*Entrants will be allowed 30-60 seconds on stage to show off their costumes.
*All prop weapons must abide by the NYGExpo Prop Policy. Please refer to the Prop Policy for details.
*Entrants should have reference material ready to be presented during pre-judging, whether printed out or on their phone. Lack of reference material will result in a deduction of points in their overall judging score. Staff will only provide one opportunity to save a single reference picture during contest registration.
*Costumes must meet dress code requirements. We ask that our participants have “swimsuit” areas entirely covered. The buttocks and groin must be entirely covered with opaque fabric. Breasts must also be covered with opaque fabric and be well-fitted at the sides and in the band. The use of body paint and/or adhesive covers does not provide sufficient coverage and is not considered acceptable.
*Original Characters are allowed and will be judged by the same guidelines as the other entries in their divisions.
Entrants will be required to sign their entry form stating that they have read, acknowledged and agreed to follow the rules of the cosplay contest. Also, by signing the form, entrants acknowledge and agree that their photos may be taken and used in promotional material for Name Your Game Expo & OKgamers.
*Winners will be announced following the conclusion of the Cosplay Contest

—-Cosplay Prop Policy—-
*All cosplay props must be inspected and tagged* by NYGE security staff at Prop’s Check.
*All firearm cosplay props must be non-operable and are required to have an orange safety tip at all times.
*Airsoft props will not be allowed and you will be asked to take them back to your room or vehicle.
*Live steel props are not allowed. Bladed props must be blunt and not have a sharpened edge.
*Any bow type props must either be unstrung or strung with a low-tensile string. Prop projectiles must have a soft, non-metal, blunted tip.
*Please do not hit, strike, swing at, or brandish props at other attendees. You may wield them when posing for photos.

*We will be working with our Safety team to make sure they are considerate when tagging your props. If you have questions or concerns during the tagging process, please talk with the team member helping you. 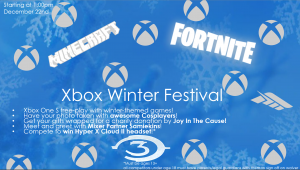 Saturday, December 22nd we will be hosting our Winter Festival event!
Starting
at 1:00pm join us for Xbox One winter-themed free-play! Joy In The Cause will
be here at 10:00am to wrap your presents in exchange for donations! Mixer Partner Samiekins will be here for livestreaming and a meet & greet!
Cosplayers are invited to show off cosplays (holiday themed cosplays are even better!) And at 6pm wrap this Holiday season up right with Halo 3 Free-For-All Slayer on Snowbound! Winners will receive a Hyper X Cloud II headset!* (the same set we use in our PC tournaments)

*must be ages 13+, all competitors under the age of 18 must bring a parent/legal guardian to sign off on consent waiver 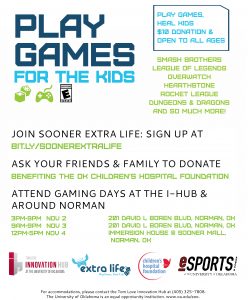 Norman, Okla. – It’s all fun and games for a good cause this weekend at the Tom Love Innovation Hub. Gamers of all ages and skill levels are invited to participate in the inaugural Sooner Extra Life gaming marathon Nov. 2-3 at the Tom Love Innovation Hub on University of Oklahoma research campus in Norman, and Nov. 4 at Sooner Mall’s Immersion House and Loot and XP. The weekend event includes video games on multiple consoles, virtual reality, as well as board and role-playing games. A donation of $10 is suggested, and all proceeds for the weekend benefit the Children’s Hospital Foundation.

“We are proud to partner with the Esports Association at OU and support the Children’s Hospital Foundation of Oklahoma through the inaugural Sooner Extra Life event,” said Tom Wavering, executive director of the Tom Love Innovation Hub. “OU has a strong history of supporting the Children’s Hospital Foundation of Oklahoma through Soonerthon, and we are excited to expand the ways in which students, faculty, staff and the community can support this critical institution.”

Some of the many games include Smash Brothers, League of Legends, Overwatch, Hearthstone, Rocket League and Dungeons and Dragons. Cosplayers are encouraged to come in age appropriate, gaming character attire, and participants are welcome to bring their own board games, video games and consoles, laptops and PCs.

Hard core gamers are encouraged to drum up financial support for their gaming endeavors via the Sooner Extra Life fundraising website at bit.ly/SOONEREXTRALIFE, much like runners obtain support for walk-a-thons.

Extra Life, a charity movement started in 2008 to help the Children’s Hospital Foundation, is an annual event where gamers across the globe raise funds during a 24-hour live stream of all sorts of games. This year, the Esports Association at OU and the Tom Love Innovation Hub are joining the fray and taking it one step further by hosting an array of games and tournaments.

Although specific games and tournaments will be highlighted, additional games of all sorts will be offered throughout the weekend for anyone not participating in tournaments. All tournaments will feature custom-made trophies and commemorative plaques from the Innovation Hub’s own Fabrication Lab, and many also feature participation prizes. Prizes will be distributed on a first come, first serve basis, so players are encouraged to sign up early.

From 5 to 11 p.m. Friday, Nov. 2, the Smash community of the Esports Association will be hosting Smash Brothers tournaments for Melee and Smash 4. And while the Innovation Hub is asking for a $10 donation to participate in the weekend’s activities, the Smash tournaments are available at no extra cost.

Meanwhile, four Dungeons and Dragons games will run throughout the night. All experienced levels are encouraged play for a short 2.5-hour session. An additional $5 donation is recommended to participate, due to a limited availability of player slots.

The tournament continues Saturday morning with a League of Legends 1v1 tournament bracket kicking off at 9 a.m. The Innovation Hub will offer shoutcasting during the tournament for visitors, and those who lose early can play in the loser’s bracket for a small donation.

After the conclusion of those tournaments, a Rocket League 2v2 tournament with live shoutcasting will start at 11 a.m., as well as a Pokémon Showdown tournament. Both tournaments will have the option to enter a loser’s bracket with a donation.

At 6 p.m., the Overwatch World Cup Finals begin, so the Esports Association will be hosting a watch party for the World Cup at that time. At 8 p.m., the Innovation Hub will launch a Rock Band concert to round off the night.

Those who participate in tournaments will receive tickets that can be cashed in for anything from snacks to silent auction bids for gaming paraphernalia. Tournament winners will receive additional tickets, but tickets also can be purchased for $1 each. Silent auctions run Friday from 5 to 9 p.m. and Saturday from 9 a.m. to 9 p.m.

A number of vendors will be set up at the Innovation Hub on Saturday, including The OKC Escape Room, which is bringing an escape trailer. Half of $20 admission costs for The OKC Escape Room trailer will go to the Children’s Hospital Foundation.

The fundraising gaming festivities continue from noon to 5 p.m. on Sunday in two other Norman locations: Sooner Mall’s Immersion Hub and Loot and XP.

Additional information about Sooner Extra Life is available online at http://www.sooneresports.org/2018/10/29/sooner-extra-life/and a Facebook page is available for RSVP information at https://www.facebook.com/events/2756339824392158/.

The Tom Love Innovation Hub is located on the University of Oklahoma research campus at 3 Partners Place, 201 David L. Boren Blvd. in Norman. The Innovation Hub’s website is http://www.ou.edu/innovationhub.

GameDev DrinkUp is a national monthly meet up for devs, gamers, and nerds alike to kick back and unwind between con craziness! A con party away from the con, if you will? Grab a few drinks and play some old school arcade games and discuss the latest in gaming, every 2nd Thursday @ The Max!

After a short hiatus and PAX South, GDDU is back and gearing up for GDC! Our team is producing an indie title and would love to connect with any local independent studios, teams, or those even remotely interested in indie development in the Tulsa area.

Not a developer? We still like you. Come for the free drinks and game tokens, for the first 10 through the door! (Other GDDU locations are holding raffles, we will not have a raffle.)

Join us for the fourth annual Wichita eSports Convention to celebrate these amazing players and teams. They will be traveling from all over the United States to compete in the $20K Midwest League of Legends Open. This event is packed with 9 semi-professional and amateur tournaments with live spectating along with virtual reality, cosplayers, artists, vendors and much more.

The Wichita eSports Convention 2018 will take place the weekend of February 2nd, 3rd and 4th. Starting that Friday Evening players and spectators will enjoy the party as they compete, play and experience a great community. 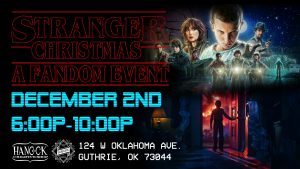 OIN US SATURDAY, DECEMBER 2ND FROM 6:00 TO 10:00 PM FOR THE ULTIMATE STRANGER THINGS CHRISTMAS PARTY!

We are joining forces with Hancock Creative Shop to create an event that is out of this world. We will not be open our normal hours that day—just from 6:00-10:00 pm.

Happy Holidays, gamers! We’ve got some events coming up to bring you some cheer. We’ll be taking a break from updates for the rest of December and come back in 2018 with a new format. 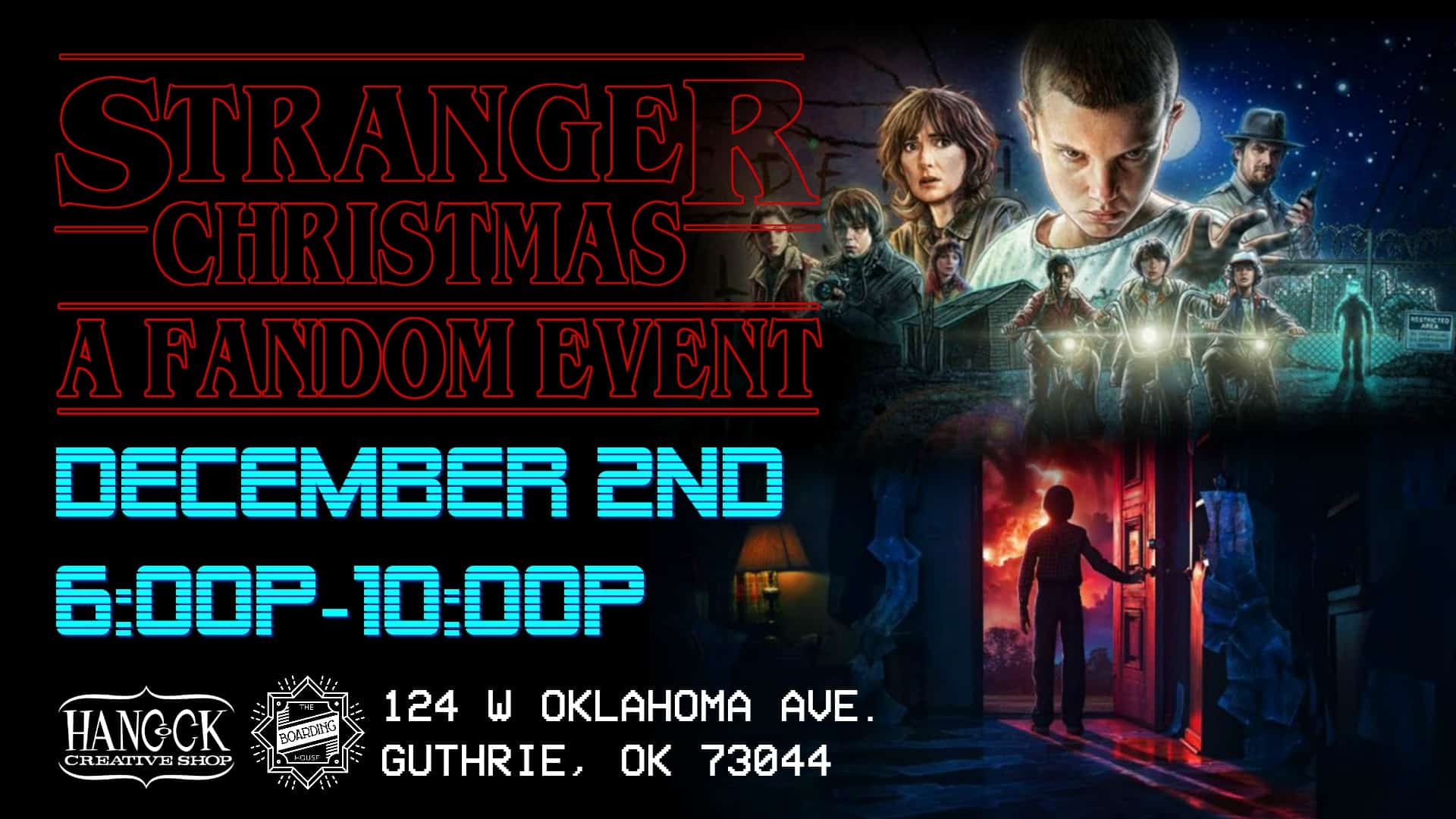 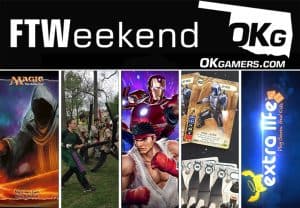 If you haven’t left the warm glow of the TV or monitor lately, don’t miss the fall foliage changing right outside your door. We’re having a lovely autumn here in Oklahoma. You my even catch a glimpse of it on your way to these awesome gaming events. 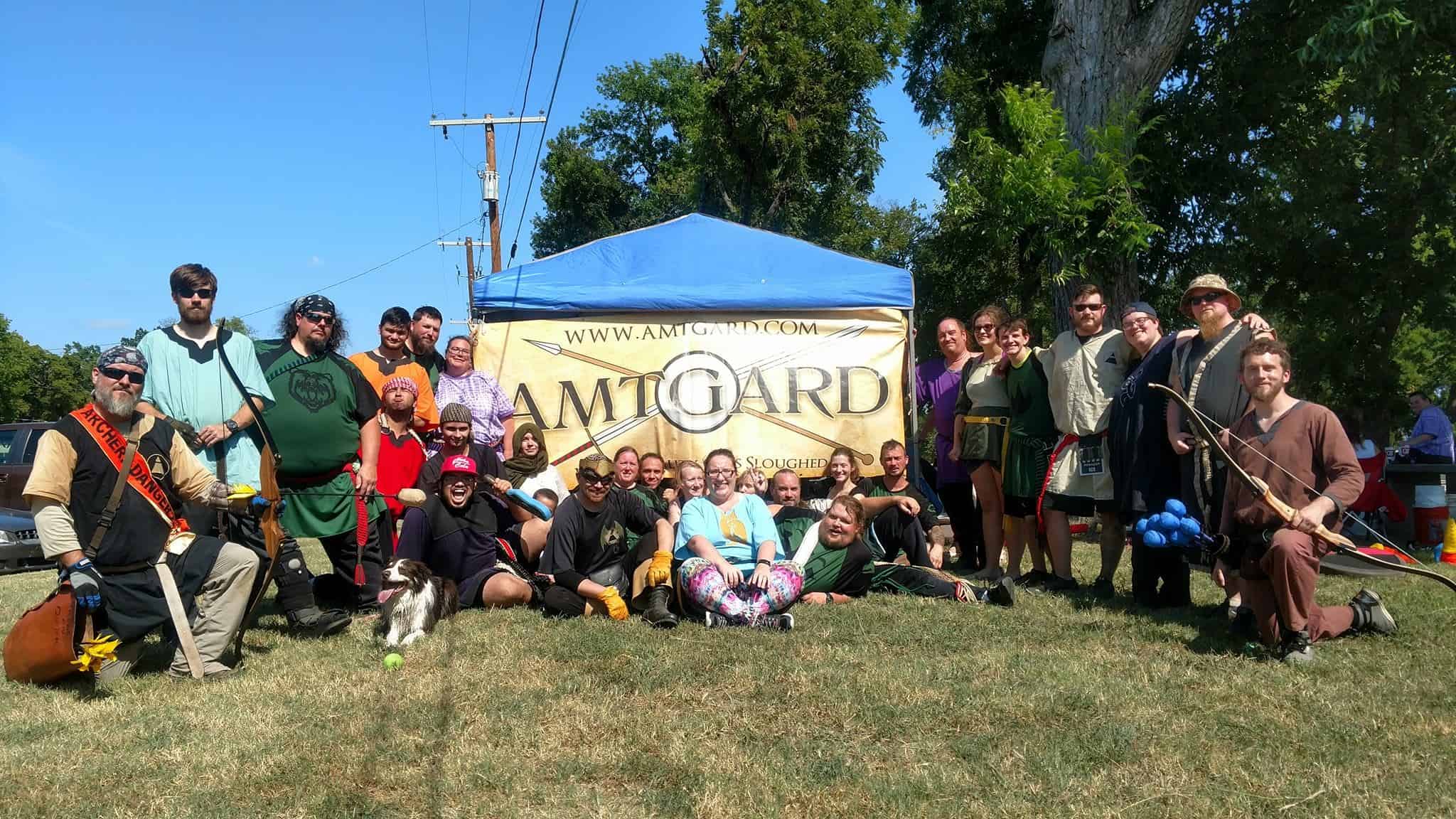 Looking to blow off some steam? Always wanted to fight like your favorite fantasy hero, but maybe less pointy and stabby? Join The Barony of Red Storm for AMTGARD, a live action fantasy combat LARP. Players wear fantasy attire and use padded weapons to immerse in a world of heroic combat, quests, crafts and more. Learn more.
END_OF_DOCUMENT_TOKEN_TO_BE_REPLACED 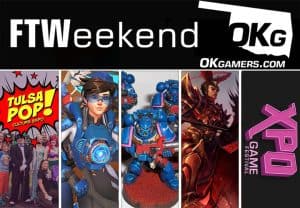 It’s finally here! The weekend we’ve been hyping you for weeks now. Two major Tulsa conventions are here with OKgamers bringing you gaming at both. Let’s get to the details. 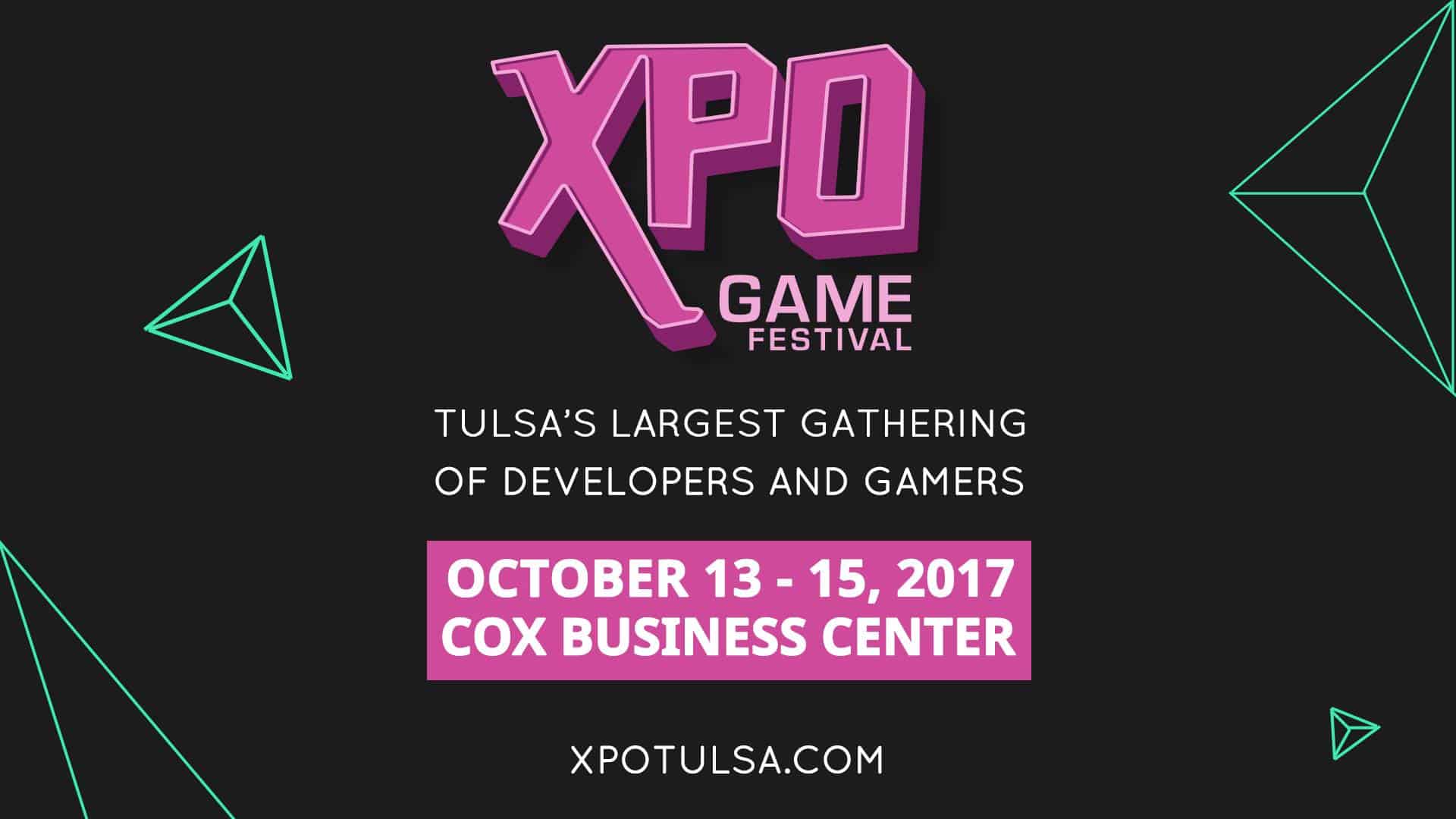