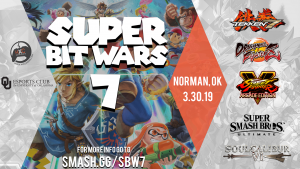 It’s Coming! HXC Gaming Events in partnership with Esports Association at The University of Oklahoma presents Super Bit Wars 7! The annual tournament held in honor of the late Forest “Solidus” Sharp! Oklahoma’s premier spring video game competition held annually. This is an event you do not want to miss. 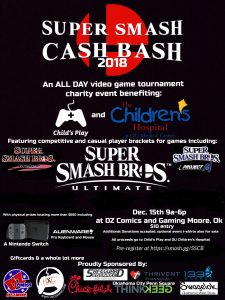 The 2018 Super Smash Cash Bash is the 1st annual charity tournament benefiting The Children’s Hospital at the OU Medical Center Oklahoma City. It is a tournament catered to all gamers, competitive and casual players alike with multiple brackets and rulesets spanning across multiple games. The games featured this year are Super Smash Bros. Melee, Super Smash Bros. Project M, and Super Smash Bros. Ultimate with the hopes of adding more games to future events.

The tournament will feature multiple mini brackets (approx. 12 brackets with no more than 16-32 competitors each.) of various rule types some catering to a casual crowd and others to the hardcore players. These are decided by the community in the weeks leading up to the event. This will hopefully give players the ability to play in multiple different styles to experience the newest Smash title and all of its new modes. Each bracket costs a player 5-10 Smash Bucks.

Smash bucks are a currency made for this tournament to encourage players to go out and try to earn as much as possible throughout the event via bracket prize pools or money matches (where players agree to gamble a set amount of their smash bucks in a one on one winner take all match). Participants start with 40SB that come with their entry fee. (65SB for early birds) Additional Smash Bucks can be earned with additional donations to the charity or by purchasing a t-shirt( all proceeds going to Child’s Play). At the end of the event we will hold an auction using SB as the currency for cool prizes such as a Nintendo Switch and Gift-cards.

Tournament registration starts at 9am with brackets beginning as early as 9:30. Brackets are hopefully set to start every hour on the hour to help encourage walk ins to join in on the fun. The Auction for prizes will take place after the last bracket has finished (hopefully around 6pm)

You can buy additional smash bucks at the conversion rate of

If you pre register you get an additional $25SB

If you can bring a set up that would be appreciated. WE WOULD LOVE TO HAVE ALL SMASH GAMES REPRESENTED (N64, Melee, Project M, Smash 4, and Ultimate)

It is recommended you Bring Your Own Controller as there is no guarantee for extras.

VENUE DETAILS: DZ’s Comics and Gaming 625 N Moore Ave, Moore, OK 73160 The venue has concessions for purchase * NO OUTSIDE FOOD ALLOWED (outside drinks are ok)* 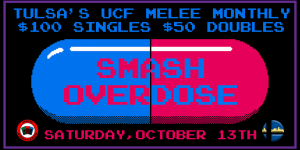 Only Melee this time but we’ll have UCF for all the setups, bracket pools, and an amateur bracket with the winner getting free entry to the next Tulsa Smash event. There will also be a $100 pot bonus for singles and a $50 pot bonus for doubles! Also for any out of state carpools, we’ll help reimburse your gas money! 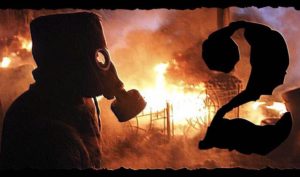 You and all of your crazy friends are hereby invited to the Okmulgee Melee Gathering Part 2! Greatness and glory await all who attend this Epic Post Apocalyptic themed Foam Fighting Event! Whether you are a experienced warrior or just curious about our amazing sport, this event is perfect for all! Fighters from all over Oklahoma will be there to test their combat skills and show off their epic gear! So don’t miss out brothers and sisters! Brutal Tourneys, Original Scenarios, Awesome Music, Endless Entertainment and a Fantastic Fallout Feast await all in attendance! This will also be a overnight event for all of you that enjoy camping! There will be a $5 dollar fighting fee and and $5 feast fee if you wish to partake. Due to the location not being fully decided, Details are subject to change. Come out and celebrate with Aftermath wasteland style!!! See you there!!!