Equinox will own professional teams that span multiple video game titles including VALORANT, League of Legends and Super Smash Bros., among others. The announcement brands Oklahoma City as the esports destination in the Midwest for professional esports athletes looking to compete at the highest levels of play.

“Esports is an exciting and growing industry with a rabid fan base,” said Chad Ford, president of Equinox. “Oklahoma City prides itself on being the ‘Modern Frontier,’ and we are excited to jump into this modern business. With all our unique combination of skills, we plan to change the game in Oklahoma.”

Equinox will produce unique in-house content in the form of podcasts, broadcasts, tournaments, video content and articles out of its newly-build 6,000 square foot facility in north Oklahoma City. The space also will function as a performance center for local, aspiring esports athletes.

“There was a need for esports in Oklahoma and finding the right team to pull this off was key,” said Chris Aguilar, general manager of Equinox. “Community and competition are key to our success. There is already so much in the pipeline, and we can’t wait to share it with everyone.”

ABOUT Equinox Esports
Equinox Esports, LLC., is the first professional esports organization to represent the state of Oklahoma. Equinox began development in early 2020 through the vision of founders Chad Ford, Chris Aguilar and Connor Knudsen. The organization is privately backed and powered by an Oklahoma-grown team of professionals with a combined 50 years of experience in the esports, higher education, marketing and cinema industries. The Equinox mission is to cultivate esports athletes, produce quality content and elevate Oklahoma City through esports.

We are a new place to play board and card games. Tabletops and LARPs are also welcome! While we don’t currently sell magic or miantures, if we get regular players, we’ll look into selling more. 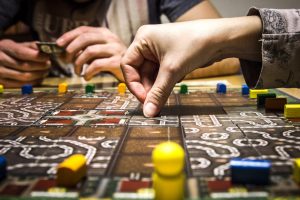 Jump back, Loretta! It’s Friday in Oklahoma and if you’re a gamer then you no doubt have a date with a favorite game this weekend. Whether you’re dreaming about the next Overwatch hero, drooling over the latest Mass Effect: Andromeda clips or locking in your pre-order of D&D Tales from the Yawning Portal, don’t miss your chance for a PUG with these events.

This con has something for every fandom with a variety of panels, vendors, artists, contests, tournaments and cosplay. Learn more. END_OF_DOCUMENT_TOKEN_TO_BE_REPLACED